“It’s the end of the world as we know it and I feel fine”: REM

Ways the world could end:
1. Global warming: Climate change could make extreme weather more severe, increase droughts in some areas, change the distribution of animals and diseases across the globe, and cause low-lying areas of the planet to be submerged in rising sea levels.

2. An asteroid hits earth: a space rock could wipe out Earth; after all, a meteor impact probably doomed the dinosaurs.

4. Bacterial fungus: A fatal fungus in humans would be catastrophic.

5. Engineered disease: Engineered deadly diseases could escape from the lab or be intentionally released, leading to a global pandemic.

6. Nuclear war: massive stockpiles of nuclear weapons around the globe could wreak destruction if they were to get into the wrong hands.

7. Robot ascension: Forget “The Terminator.” Killing machines are not far from reality. The United Nations recently called for a ban on killer robots.

8. Overpopulation: With the global population at 7 billion and counting, many conservationists think population growth is a threat to Earth.

10. Zombies attack: Hey, even if there are no zombies during the apocalypse, you’ll still need to protect your home and yourself from dangerous looters and squatters that are looking for a place to stay.

When it all comes down, here are some rules of survival to govern all areas of your post apocalyptic life:
1. Avoid other people: Establish a base camp away from populated areas. People are loud, noisy and in times of stress they will have no problem stealing your food/wife/water/weapons/clothes.

2. Have an escape plan. Your camp may become overrun, so you need a back-up. A safe haven to slip away to. This must be known by no more than 3 people for sake of security. Ensure your safe haven is well stocked, hidden and fortified as much as possible.

3. Fresh water Get plenty of bottles water with a long shelf life and lots and lots of water purification tablets. Do not drink any water laying around on the ground. With the breakdown in society the population will have been shitting and dying in rivers, lakes, streams and puddles. They are all dirty, disease ridden cesspools of death, and the water will be dirty too. Don’t think cannibalism: Human beings are not fat-free, disease free or even that tasty.

4. Get guns. Be Prepared – learn to shoot, and know where to loot guns from.

5. Supplies, supplies, supplies. Your money will be no use to anyone when the big end comes. Stock up on obscure items like dry dog food, batteries, socks and get a large library of vegetable seeds. You can use some of these items to barter for things later on.

Use your urine to make:
1. Gunpowder: During the U.S. Civil War, men were manufacturing potassium nitrate (gunpowder is 75 % potassium nitrate) in huge amounts. One process, known as the French method, involved mixing manure with ashes, straw and urine; the mixture would be tended for many months, then filtered through more ashes and a bit of water.

2. Fertilizer: Since urine is high in nitrogen, it makes an excellent fertilizer

3. Medicine: Many cultures have found medicinal uses for pee. Hindus traditionally applied urine to the skin as a dermatological treatment, and the Chinese used it to treat wounds.

Lemons can give you electricity
1. roll the lemon to get the juices
2. Cut 2 slits in the lemon
3. In one slit place a dime, the other use a penny.
4. Now you have electricity from a lemon, you can test how much with a multimeter

If you have a fishing line: It can have dozens of backcountry uses when you’re in trouble. Hungry? Catch your food. Exposed or broken? Tie up a tarp for your shelter, repair clothes and shoes, or stitch up your wounds.

Condoms: can easily hold up to a gallon of water — enough to keep you alive for a full day — without getting overstretched. It also has the very important benefit of being small and easy to carry around.

Shoelaces: can serve a number of purposes — whenever you might need rope or string, your shoelaces usually can do the job. Use them to make a splint in case of injury. If you have a sharp object to use as a hook, a shoelace can make a decent fishing line. Tie sticks together to make a quick lean-to shelter or even a raft.

Wow: Toothpaste can be used to treat bug bites and insect stings, also, got to stay minty fresh while out on the trail.

Rock on: Large Rocks placed around a camp fire will absorb heat, and even when the fire dies down they will still radiate enough heat to keep you warm. Also, the hot rocks can be placed into a cup of water and the heat from the rocks will begin to boil and purify the water.

Show some guts: Animal guts that you would usually throw away should be kept to use as bait for fishing, traps and snares.

Light ‘em up: Always carry a pack of cigarettes even if you don’t smoke. Offering people cigarettes can help you make friends, or calm people down if they’re suffering from stress or nicotine withdrawal.

Where there’s Smoke there’s fire: Smoke is a natural insect repellent. If you have a fire going, wave your jacket, trousers, sleeping bag, and poncho etc around in the smoke to keep mosquitoes and ants from eating you alive. Also Fire is a natural predator repellent. It’ll stop a bear from stealing your bag or your girlfriend in the night.

Sock it away: Always pack spare socks, at least 2 extra pairs of. Socks can be used to filter the dirt out of water, keep animal guts suspended in a tree and of course prevent you from getting trench foot and blisters.

Top 10 Post-Apocalyptic Movies of All Time
1. The Last Man on Earth (1964) Vincent Price is the lone survivor after a disease turns everyone into living-dead vampires.

6. The World, the Devil and the Flesh (1959) Three lone survivors in New York City, when everyone else has vanished (they don’t say how or why).

7. Reign of Fire (2002) in the future, society has collapsed under the threat of dragons. 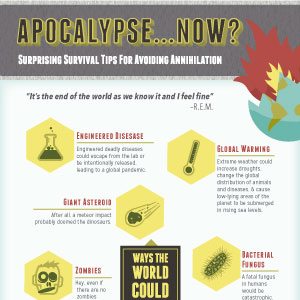