How does the practice of some communities, called sanctuary cities, refusing to aid in federal deportation efforts, impact national security and safety?

What Is a Sanctuary City?

A state, county or city where law enforcement will not inquire about the immigration status of a criminal suspect and/or has a set of guidelines under which they will not notify federal immigration officials before a suspect’s release. Usually those guidelines are based on the person’s previous offenses (if any).

How many sanctuary cities are there? That depends on your political leanings.

How does illegal immigration impact the crime rate? Again, the numbers are less than clear.

Number of illegal immigrants in U.S. by year (3)

Over that same period, the national violent crime rate dropped 48%.

Percentage of federal murder convictions in 2013 against undocumented immigrants (3)

That number by itself is scary, but consider that it comes from only 8 cases, as few murders are prosecuted at the federal level.

But even this number is somewhat misleading, as it includes both legal immigrants and those here illegally.

Whatever the statistics on crime and immigration, the shooting death of a woman in San Francisco has raised new concerns about illegal immigration and how it affects national security and safety.

32-year-old Kathryn Steinle died after being struck in the chest by a stray bullet while walking along a busy street. Mexican native Francisco Sanchez has been charged with murder in Steinle’s death, and officials reported Sanchez had been deported multiple times before the shooting.

Sanchez was released by local authorities a few months before the shooting after a drug charge was dropped. (5)

Times Sanchez had been deported to Mexico (2)

Felony convictions Sanchez has since 1991 (2)

Many sanctuary cities are notably left-leaning, like San Francisco, but others don’t honor federal immigration hold requests for legal reasons. A federal court ruling said immigration detainers, which ask local police to place up-to-48-hour holds on immigrants suspected of being in the U.S. illegally, were not sufficient reasoning to keep someone in jail. (6)

Deportations of illegal immigrants are up overall but have stalled out for those with criminal records. 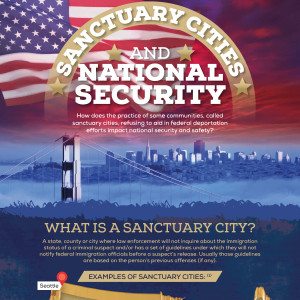