Coupled with the U.S. presence in Iraq and Afghanistan—
Al Qaeda has had to change its tactics.

The U.S. occupation of Iraq and Afghanistan has given rise to the myth that the US wants to conquer the Arab world.

And Cells have been broken up in

But even on the run, Al Qaeda has an estimated operating budget of $30 million a year.
Used for recruiting, training, and executing attacks.

The Faces of Leadership

Adam Gadanh, or “Azzam the American”

After the death of bin Laden, and the U.S. occupation of Afghanistan and Iraq, Al Qaeda entered a transitional phase in which new leaders emerged, presence in new locales was established, and decentralized, but well informed fighters continue their war against the west. 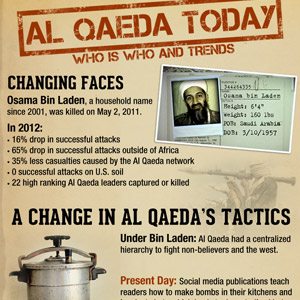