Is the US Becoming a Police State?

Militarized police, sophisticated surveillance, and normal citizens with little say in what goes on. The US has all the trappings of an all-powerful police state.

Definition:
1. A totalitarian state controlled by a political police force that secretly supervises the citizens’ activities.

Nazi Germany: Mocked democracy.
U.S.: Pretends to be the model of democracy for the whole world.

The US is a ‘managed democracy.’
Definition: a political form in which governments are legitimated by elections that they have learned to control.

We definitely have the policing power:
Over the last 25 years, civilian law enforcement has been increasingly militarized in America.

There has been a 4000% increase in “no knock,” military-armed SWAT raids over the past 30 years.

Even responding to calls about angry dogs and domestic disputes.
And using military tactics and weaponry on U.S. citizens.

We also have the world’s largest prison system.

The U.S. has 5% of the world’s population, and 25% of the world’s prisoners.
1/99 adults in the US are behind bars
1/31 adults are under some form of correctional control–
Including:
Prison
Jail
Parole
Probation

With the NSA providing constant surveillance
By Wiretapping…
Tapping entire offices…
And cell towers…
With 9,000 “Tower dumps” in 2013
Tower Dump = a record of all calls bounced off of a cellphone tower within a certain period of time.

Co-Traveler is one of the NSA’s most powerful analytic tools.

— And even entire counties…
By installing fiber-optic splitters in telecom facilities.

Even unopened hardware is monitored…

The NSA intercepts computer shipments to plant spyware on new systems.
Much less powerful nations have been police states, why couldn’t the U.S. be one? 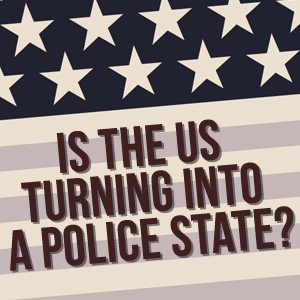