Since 1980 the U.S. prison population has more than quadrupled (4.6x) by growing to a staggering 2.3 million people. With some states paying as much to keep a person in prison as it would cost to pay tuition, room, board and fees at Harvard, we must ask the question, does prison work?

What is Prison For?

In America, prison has historically had four major purposes:

Before the mid-1800’s, prisons focused on retribution, incapacitation, and deterrence. They mainly served to remove criminals from society.

Sometime after the mid-1800’s, the philosophy of incarceration shifted to rehabilitation.

The 1870 and 1970 Prison Congresses both endorsed incarceration principles such as:

This rehabilitation era lasted until the early 1980’s.

What stopped the rehabilitation era?

In 1974 a criminologist named Robert Martinson published a report that claimed:

“with few and isolated exceptions, the rehabilitative efforts that have been reported so far have had no appreciable effect on recidivism.”

In a 1989 case called Misretta v.U.S., the U.S. Supreme Court upheld federal sentencing guidelines that no longer made rehabilitation a serious goal for inmates.

Does Prison Work to Decrease Crime?

Since the incarceration rate has more than quadrupled and crime has dramatically decreased, it would appear that prisons emphasizing retribution, incapacitation, and deterrence do, in fact, work.

The Cost of Incarceration

Expanding prisons is less effective than presumed and the cost of imprisoning inmates is growing out of control.

Halfway Houses are used mostly as an intermediate step to help people return from prison to the community but they can also be used instead of prison or jail when a person’s sentence is very short. It costs about $74 per day for a person to be in a halfway house.

House Arrest requires offenders to stay home, often with electronic monitoring like an ankle bracelet. It costs about &10.00 per day for a person to be on house arrest.

Probation is an effective alternative for low-level crime. It keeps the offender in the community while still limiting freedom. It costs about $9 per day for a person to be on probation.

A variety of research demonstrates that investments in drug treatment, inmate education and interventions with at-risk families are more effective than expanding incarceration.

For every $1 spent on drug treatment:

RSVP: Taking serious the charge to “keep the peace”, the San Francisco Sheriffs Department founded the Resolve to Stop the Violence Project (RSVP); an intensive re-education program for inmates. When compared to a similar group of inmates without the program:

Nurse-Family Partnership: From pregnancy until their child’s 2nd birthday, low-income moms are provided with the care and support they need to give their child a healthy start.

So, does prison work?

While prison does work 25% of the time, the most effective and cost efficient way to decrease crime is by investing in prevention and rehabilitation. 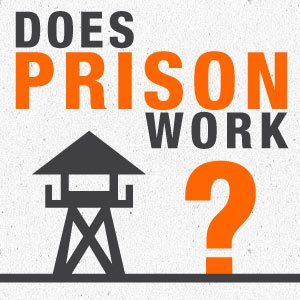