Protecting the President of the US: Assassinations, Attempts and Conspiracies

Frequency of Assassinations and Attempts

The frequency of assassination attempts has remained the same while the success rate has nearly doubled.

Establishment of the Secret Service

Early on, there was little concern for the safety of the POTUS
The first police presence, in Washington, established in 1805
The mayor appointed a high constable and 40 deputies
Threat letters were not taken seriously and presidents did not have protective escorts
Andrew Jackson received many threatening letters
He endorsed the letters and sent them for publication in the Washington Globe
1865: The Secret Service was created to seek out counterfeit currency
1901: The Secret Service expanded to systematic, continuous presidential protection after William McKinley was shot
Presidential protection had been intermittent before then.
1908: The Secret Service began protecting the president-elect
Roosevelt also transferred some SS agents to the Department of Justice to form what would become the FBI
Today the Secret Service protects:
The president and vice president, the president-elect and vice president-elect
Immediate family members the above mentioned
Former presidents and their spouses and children up to age 16
Visiting heads of foreign governments and their spouses
Other individuals per Executive Order of the President
National Special Security Events

Assassinations of the POTUS

The hope was to throw the Republican Party into chaos, giving time for the Confederacy to reassemble
Booth was shot by Union soldiers in a barn where he and his accomplice were hiding

William McKinley
Shot September 6,1901 – died September 14
Assassin: Leon Czolgosz
Location: Temple of Music in Buffalo, NY
Alleged reasons:
Czolgosz insisted that, by shooting the president, “I only done my duty.”
Czolgosz said that McKinley was “shouting about prosperity when there was no prosperity for the poor man”.
Czolgosz was charged with First Degree Murder and sent to the Erie County penitentiary

John F. Kennedy
Shot November 22, 1963
Assassin: Lee Harvey Oswald
Location: motorcade through Dealey Plaza, Dallas, TX
Alleged reasons:
Not much is known about Oswald’s motives
Some speculate that Oswald resented authority and wanted to get his name in history
Oswald was shot and killed by Jack Ruby outside the courtroom before his trial

Andrew Jackson
January 30, 1835
Would-be Assassin: Richard Lawrence
Location: a congressional funeral in the Capitol building
Alleged reasons: Lawson believed Jackson had conspired to keep him poor and out of work

Theodore Roosevelt
October 14, 1912
Would-be Assassin: John Flammang Schrank
Location: in an automobile in front of the Hotel Gilpatrick in Milwaukee
Alleged reasons: Schrank said he had nothing again Roosevelt, himself, but against any ‘third-termer’. He shot him as a warning to other ‘third-termers’.
Callout: Roosevelt was shot, but the bullet hit his chest after going through his steel eyeglass case and a 50-page copy of a speech in his pocket. He went on to deliver his 80+ minute speech and went to the hospital afterward.

Franklin D. Roosevelt
February 15, 1933
Would-be Assassin: Guiseppe Zangara
Location: Miami, FL
Alleged reasons: Quote from Guiseppe after his sentencing:
“I decide to kill him and make him suffer. I want to make it 50-50. Since my stomach hurt I want to make even with capitalists by kill the President. My stomach hurt long time.” 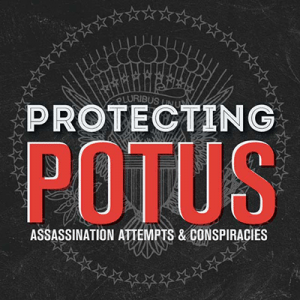