Securing Our Schools: the need for safety in the classroom

April 9, 1891: The first known mass shooting in the U.S. where students were shot, when 70 year old James Foster fired a shotgun at a group of students in the playground of St. Mary’s Parochial School, Newburgh, New York

August 1966: Charles Whitman opened fire from the clock tower at the University of Texas at Austin, killing 16 people and wounding 31.

April 20, 1999 Littleton, Colorado: 14 students (including shooters) and one teacher killed, 27 others wounded at Columbine High School in the nation’s deadliest school shooting. Eric Harris, 18, and Dylan Klebold, 17, had plotted for a year to kill at least 500 and blow up their school.

March 24, 1998, Jonesboro, Ark.: Four students and one teacher killed, ten others wounded outside as Westside Middle School emptied during a false fire alarm.

April 16, 2007, Blacksburg, Va.: A 23-year-old Virginia Tech student, Cho Seung-Hui, killed two in a dorm, then killed 30 more 2 hours later in a classroom building. His suicide brought the death toll to 33, making the shooting rampage the most deadly in U.S. history.

Dec. 14, 2012, Newton, Connecticut: Twenty-six people — 20 students and six adults — were shot and killed at the Sandy Hook Elementary School by 20 year old Adam Lanza.
QUOTE: “This was like our 9/11 for school teachers.” – said by a teacher in Florida to the Associated Press

The cold, hard facts:
Since 1980, 297 people have been killed in school shootings.

Lessons learned, steps taken:
After the Columbine shootings:
Some schools across the country turned themselves into near-fortresses

Kindergarden students huddled beneath desks in a lockdown drill. Such drills have become common.

Some schools installed metal detectors and security cameras, banned backpacks, required students to carry IDs and posted police in the hallways — all in the name of keeping students safe.

In time, experts realized the first and best line of defense is always a well-trained, highly alert staff and student body.

The No. 1 way we find out about weapons in schools is not from a piece of equipment but from a kid who comes forward and reports it to an adult that he or she trusts

FACT: Allocations for the Department of Education’s Safe and Drug-Free Schools program were cut by a third between 1999 and 2008, to about $294.8 million. And a program that has put about 6,300 police officers in public schools since Columbine was scrapped by the U.S. Department of Justice after 2005.

FACT: A 2008 Secret Service report found that in more than 80 percent of instances of school violence, at least one person, usually a fellow student or peer, had knowledge of the attackers’ plans.

After the Virginia Tech massacre
38 states banned students from carrying or using weapons in schools – 16 of which have specifically banned guns from any part of a college campus.

EBay stopped allowing the sale of firearm parts and ammunition on the popular site after it was learned that the shooter had purchased 10-round magazines for his gun on the site.

Schools in the US as well as abroad made changes to their own school safety politicies and procedures in the aftermath of the Virginia Tech shootings.

Changes to then Federal Gun Laws were made and loopholes that allowed the shooter, who was deemed mentally unstable, to purchase a gun were closed. Now someone with a known history of mental illness like Seung-Hui Cho are not allowed to purchase guns or ammunition.

After the Sandy Hook Elementary massacre:
Some districts have trained teachers and school staff to carry guns in case of a school shooter.

Since January, 2013, about 4,500 people across the country have been trained in mental health first aid for children.

Schools need counselors, psychologists and officers building relationships with kids, because they are the best line of defense.

Districts are looking at how to harden the infrastructure of their schools.

Besides shoring up windows, schools around the country were busy over the summer doing things like installing new locks on classroom doors.
Administrators realized every school should have crisis teams that review their plans regularly; every school would be wise to re-evaluate its security measures.
Infrastructure changes: Some schools are building single, prominent entryways, and reduced landscaping that once provided a place to hide. Restrooms are being shifted away from entryways and moved. Simpler keyless entry systems on doors make it less tempting to prop them open. Elaborate announcement systems that let police address a shooter without speaking to every classroom are being installed.

Some schools (with money) have invested in a high-tech system called Security Alert for Education (SAFE). Here, teachers wear a pendant that amplifies their voice during lectures — but also has a panic button button that allows them to immediately alert 911 during an emergency. Cameras mounted in classrooms are integrated into the system
The NRA suggests having armed police officers in the halls

Experts say: Major components and tasks for creating a safe school climate include: 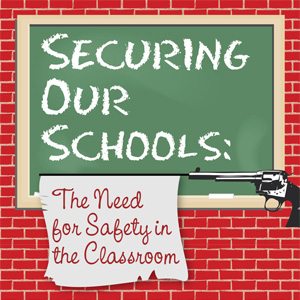