Americans have mixed feelings about the Transportation Security Administration. While the organization itself touts impressive crime-stopping numbers, many find them better at creating long lines and conducting humiliating body searches. Let’s take a look at how the TSA came to be and the darker side of such strict airline security.

TSA’s mission: “Protect the nation’s transportation systems to ensure freedom of movement for people and commerce.”

A brief history of the TSA (1)

The 9/11 terrorist attacks on the World Trade Center lead both the public and the government to ask for tighter security measures at airports.

President George W. Bush signs the Aviation and Transportation Security Act, leading to the creation of the TSA. All passenger bags are checked by TSA agents.

Explosive detection systems are installed at airports to check bags for hidden bombs.

TSA requires passengers to remove their shoes so they can be checked for explosives.

The ban on liquids is amended, allowing liquids, gels and aerosols in 3.4 oz. containers or smaller to be carried on when placed in single, plastic, resealable bags.

Advanced imaging technology is installed in airports, where passengers must stand in a partially enclosed screening structure, raise their arms and wait for a full-body scan.

Pat-down procedures are implemented at more airports, taking place even after full-body scans. These procedures have become the source of much controversy among civil rights groups.

Automated screening lanes are introduced, including radio frequency ID tags attached to item bins that are linked to X-rays of the items.

… with more than 44,000 transportation security officers

… and over 600 security inspectors

Airports with the most firearm discoveries (1)

Despite these seemingly impressive numbers, TSA agents are still failing “Red Team” tests at an alarming rate. The so-called Red Team is a group of Homeland Security agents who attempt to smuggle mock explosive or weapons through TSA checkpoints.

Percentage of TSA Red Team test failures in 2015. Agents failed to find the hidden mock weapons or explosive 67 out of 70 times. (2)

And ever since it was founded, TSA has endured thousands of airline passenger complaints each year.

Amount paid to passengers by the TSA for the loss, damage or theft of personal items (4)

Theft has been an issue with TSA employees in the past. In 2011, two employees from New York’s JFK airport were arrested for stealing $40,000 from checked baggage. (4)

The top five airports with high incidents of TSA theft include: (2)

Many complaints are also tied to the aggressive “pat-downs” TSA officials give select passengers.

Complaints made to the ACLU from passengers who felt they were subjected to invasive, unjustified searches. In some cases, people reported feeling assaulted and traumatized by their experiences. (5) 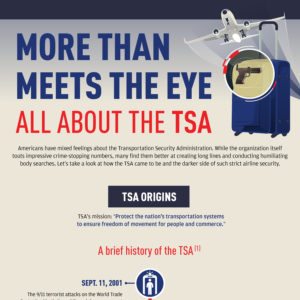