(Voluntary) Boots on the Ground: A Look at the Vigilantes Fighting ISIS

As world powers continue to withhold deploying troops in Syria to fight ISIS, some people have taken matters into their own hands.

Vigilantes from at least 13 countries and states are now fighting ISIS in Syria.

Vigilantes fight alongside a multifarious front.

And come from an array of backgrounds.

The number of vigilantes isn’t clear.

But they’re dwarfed by foreign recruits.

The typical US path into battle is long and dangerous.

Drive through border into Iraq.

And it’s not cheap.

Some vigilantes receive $100 monthly stipends. Most get nothing.

The good news? If you want to join, there’s no stopping you.

It’s legal, and nearly 100% of vigilantes have made it to Syria. 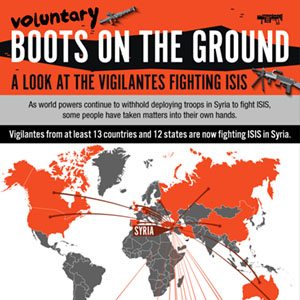