Droning On: The Rise of Remote Piloted Flying

In Kathleen Ann Goonan’s 1994 science fiction/ nanopunk novel “Queen City Jazz”, she introduced enormous bio-engineered bees that “fertilized” giant nanotech flowers on tops of highrise buildings with data. While we’re not at the the “bio-nan” stage where organisms are enhanced with nanotech, there are studies in progress in which bees and possibly other large insects have RFiD chips attached. These chips have wireless technology that allows collected environmental data to be transmitted to a hub. Of course, these are real bees. Then there are the non-organic “microdrone” robotic flying craft, not much larger than the living counterparts that inspired these drones — including one known as the RoboBee. While scientists and engineers are trying to get microdrones to work together like a swarm of bees, the military is considering their use in spying and general surveillance, to supplement the much bigger drones that most people are familiar with.

How Can Drones Be Used?

There are several types of drones that can be used collectively for the purposes above. Here are a few, which come in all shapes and sizes.
• Quadcopters, as well those with 6 or even 8 blades.
• Larger unmanned aerial vehicles (UAV) that resemble small helicopters and planes, and sometimes even larger planes.
• Microdrones, which are insects-sized and sometimes insect-shaped, and having flapping wings. There are also somewhat larger bird-inspired drones with flapping wings.

Bird and Insect Drones
• 80% of world’s animal species (900K types) are Insects and their relatives
• Microdrones are the result of insect-inspired flying vehicles
• This required high-speed photography to understand the aerodynamics of insects.
• Torkel Weis-Fogh, a Danish zoologist, studied wing motion of hovering insects in the 1970s, using high-speed photography. He came up with the “clap-and-fling effect” theory of insect flight, which is based on how insect wings create a spiral of air that pushes the insect up or forwards on each beat of their wings.
• In the 1990s, one of his former students, Charles Ellington, also a zoologist, created a robotic wing that mimicked hawk moth movements.
• Neurobiologist Michael Dickinson built a robotic wing inspired by the fruit fly. In 1998, he electrical engineer Ron Fearing won a $2.5M DARPA grant to create a fly-sized model — successfully accomplished after 7 years by Rob Wood, who had started the project while still a grad student.
• TechJet created a robotic dragonfly with a 6-in wingspan, weight 5.5 grams (less than an American quarter).
• The DelFly Explorer is the world’s smallest non-tethered drone with flapping wings, at 20 gm in weight, with a 28cm wingspan. (The RoboBee is tethered.)
• The British military is already using non-insect-shaped microdrones for scouting missions in Afghanistan.
• Other insect- and bird-inspired drones include the Nano Hummingbird, Dragonfly and RoboBee.
• The RoboBees creator, Rob Wood, speculates that they could be used in swarms at disaster sites to search for survivors.

Robotic insect swarms are actually difficult to produce because of limitations on battery life, especially at microdrone sizes. However, Hungarian researchers have managed to assemble a team of 10 drones that self-organize themselves as they fly.
• These quadcopters have GPS, wireless radios and processors which collectively allow the pack to navigate in a formation, follow a leader, and more.
• The team behavior was modeled after pigeons.
Other researchers have videos on YouTube showing packs of multiple mini quadcopters working in a team to do something athletic or musical.

It should be noted that the U.S. military definition of “combatant” is a bit loose, making it possible to claim that no civilians were killed in a particular drone strike. According to the Bureau of Investigative Journalism, if an intended target is killed in a strike and nearby males of military age are also killed, they are deemed “combatants” — even if, according to investigative journalists and UN investigators, they were simply innocent male civilians. Also, critics of the killer drones — including one writer in The Guardian who claims to have worked on the U.S. drone program — point out that video feedback is so poor that you cannot tell the difference between a shovel and a gun. A remote pilot under pressure may end up striking unintended targets. Fortunately, future military drones will be smaller and have more accurate weapons, presumably resulting in lower numbers of civilian casualties. It’s very likely that we’ll see ever more drones in the near future, including in the USA, for law enforcement and general surveillance. While some uses are destructive, most are valuable to many fields and industries. 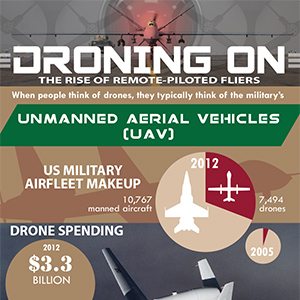