White collar crime is normally a nonviolent crime, committed by ordinary people, motivated by financial gain. According to the FBI, the main agency investigating these types of offenses, are crimes, “characterized by deceit, concealment, or violation of trust.” There are many types of white collar crimes. However, the major culprit to these crimes includes corporate fraud, money laundering, and embezzlement. Along with the FBI, other agencies or entities that investigates white collar crimes include the Securities and Exchange Commission (SEC), the National Association of Securities Dealers (NASD), and sometimes state authorities.

In the past decade, with the technology era booming, white collar crimes have begun to be more common. It has also had a huge impact on society. New ways to protect our property, possessions, and money are continuously being developed. This is done in hopes that the people doing these crimes will find it more difficult to create fraudulent behavior and crimes for financial gain. One of the most large-scale white collar crimes there are is corporate fraud. Corporate fraud is when it affects government agencies on a personal level. There is usually a significant loss to the company. An example of corporate fraud involves manipulating financial data, the valuation measurements or even the shares of the company. The goal to this is to make the financial performance appear or seem better than it may actually be.

Insider Trading is another type of white collar crime. This means people doing these crimes provide “inside” information to the wrong individuals, not yet made public to others. Many people that participate in insider trading receive kickbacks and falsify financial accounts for their profit. This also includes misuse of corporate property for personal gain and creating individual tax violations. 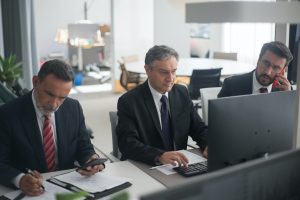 Now that you have a picture of the kind of white collar crimes are, here are some ways the FBI work to help stop people from making more crimes, such as corporate fraud. For example, the FBI partners up with other agencies in order to make headway on more complex investigations. Especially if the other party has better experience with specific areas of interest. Such as with securities, taxes, energy, pensions, and commodities. The FBI does also focus on investigating allegations of fraud by working with the SEC, CFTC, and Internal Revenue Service. In some cases, they may also work alongside the Federal Energy Regulatory Commission and the U.S. Postal Inspection Service for help.

Professionals working on stopping white collar crimes, such as the FBI, also operate task forces. They work with law enforcement personnel to track, monitor, and infiltrate possible instances of fraud that may come through their offices. FBI personnel also puts a focus on money laundering facilitation, key players involved in facilitating the money itself, and determining which financial institutions are doing any illegal activity.

How White Collar Criminals are Prosecuted

Yet, how should government officials, such as the FBI really prevent these types of crimes from occurring? Is there a right way and a wrong way to stop white-collar crime? In the past 20 years or so, the FBI used a system called “Deferred Prosecution“.  Which are “informal agreements between the defense lawyer, the defendant, and the prosecutor to dismiss a case up front, that is, in advance of the accused agreeing to some concessions.” Basically, they prosecute the individuals doing the crime, not the corporations itself. As a result, the defendant may receive a misdemeanor or similar offense for the crime made.  In some cases, the criminals just need to pay a fine for their actions. Which is like a slap on the wrist, and allowing them to go their merry way. This does not deter these criminals from stopping the crime, though.

however, some people in law enforcement and the legal system wants to find a better way to prevent and deter these white-collar crimes from happening altogether. In fact, there is one Judge, Jed S. Rakoff, that wants white-collar criminals to experience real punishment. Rakoff believes deferred prosecution is just a “get out of jail free” card. It may help deter instances from occurring for a time, yet not a means to an end.  This information was from an article by Stanford Business, where Rakoff was interviewed and stated that “a person, [executives accused of white-collar crimes] feared prison, and they feared it mightily.” Simply put, they rather pay the fine, over and over, in order to avert prison time.

On the other hand, Judge Rakoff wants to see them get the fair punishment they truly deserve. If these corporate executives do go to jail, maybe then there will be some light of hope in the battle of white-collar crimes.