Biological Attack — Are We Ready?

Imagine the nightmare scenario of an attack from a terrorist group or hostile nation. It probably involves a radioactive blast and a mushroom cloud, right? What about an attack that involves germs and surgical masks? How does that factor in? The reality is biological attacks may be just as devastating as the typical terrorist attack. How prepared is the U.S., and what’s the history of biological warfare and terrorism throughout the world?

The news isn’t good — the U.S. is scarcely prepared for a large-scale infection of the population, whether man-made or naturally occurring. And this is despite spending billions to improve response efforts.
How prepared is the U.S. for a large-scale contagious disease outbreak?
Area Grade
Detection and diagnosis D
Attribution F
Communication C
Medical countermeasure availability D (B for smallpox)
Medical countermeasure development and approval D
Medical countermeasure dispensing D
Medical management D
How much does the federal government spend on preparedness?
$5.5 billion
Annual federal spending on biodefense programs
That’s more than the National Institutes of Health spends on HIV/AIDS, immunization, mental health and women’s health.
Biodefense $5.5 billion
HIV/AIDS $3.1 billion
Immunization $1.7 billion
Mental health $2.3 billion
Women’s health $3.9 billion
$1 billion
Total spent since 2003 on federal BioWatch program, which aims to detect the release of airborne pathogens as a result of a terrorist attack
BioWatch operates in about 30 cities across the country, reportedly including Philadelphia, New York, Washington, San Diego, Boston, Chicago, San Francisco, St. Louis, Houston and Los Angeles, though the cities where it operates have never been officially released, and criticisms about the program remain.
149
Positive results for dangerous pathogens reported since the start of the BioWatch program
0
Actual pathogens detected; all results were false alarms

What They’re Looking For

The Federal Centers for Disease Control and Prevention list more than 40 pathogens as potential bioterrorism agents; here are a few of the most dangerous:
Anthrax
Spores are found readily in nature, can be produced in a lab and can last for a long time in the environment. Contact with anthrax can cause severe illness in both humans and animals, though it is not contagious.
10%-15%
Survival rate from inhalation anthrax without treatment
55%
Survival rate after aggressive treatment
Symptoms of inhalation anthrax

Botulism
A muscle-paralyzing disease caused by a toxin made by a bacterium called Clostridium botulinum. Foodborne botulism is the most common cause of infection.
6 hours
Most rapid appearance of symptoms
Symptoms of foodborne botulism

Brucellosis
It’s most frequently transmitted to humans through dairy products, but those who spend time around infected animals are also susceptible, such as hunters, veterinarians and meatpacking workers.
Death from infection is rare (only 2% of cases), but recovery can take several months.
Symptoms of infection

Plague
Plague is caused by Yersinia pestis, a bacterium found in rodents and their fleas in many areas around the world. Yersinia pestis used in an aerosol attack could cause cases of pneumonic plague.
Without early treatment, pneumonic plague usually leads to respiratory failure, shock and rapid death.
Symptoms

Smallpox
Smallpox is a serious, contagious and sometimes fatal infectious disease. There is no specific treatment for smallpox disease, and the only prevention is vaccination.
1949
Last reported case of smallpox in the U.S.
1977
Last naturally occurring case in the world, reported in Somalia
Symptoms

Tularemia
Tularemia is a potentially serious illness that occurs naturally in the United States. It is caused by the bacterium Francisella tularensis, which is found in animals (especially rodents and rabbits). Tularemia is not known to be spread from person to person. The disease can be fatal if it is not treated with the right antibiotics.
Symptoms

The world is no stranger to people using diseases as weapons.
1000 BC
Arsenic smoke is used by the Chinese.
184 BC
In a sea battle, Hannibal of Carthage hurls clay pots full of vipers onto the decks of enemy ships.
1100s
Bodies of plague or smallpox victims are hurled over city walls.
1495
The Spanish offer wine spiked with the blood of leprosy patients to the French .
1650
Polish artillery general Siemenowics fires spheres filled with the saliva of rabid dogs at his enemies.
1763
British officers come up with a plan to distribute smallpox-infected blankets to Native Americans at Fort Pitt, Pennsylvania.
1914
German artillery soldiers fire 3,000 shells filled with dianisidine chlorosulfate, a lung irritant, at British troops. The shells contained too much TNT, which destroy the chemical.
1915
Allied troops make their own chlorine gas attacks; Germany comes up with diphosgene gas; the French try cyanide gas.
1917
Germany introduces mustard gas, which burns the skin and lungs.
1936
German chemist Gerhart Schrader comes up with nerve agent tabun (later called German agent A or GA). Two years later, he develops sarin.
1950s
British and U.S. researchers develop VX, a nerve gas so toxic that a single drop on the skin can kill in 15 minutes.
1959
Researchers at Fort Detrick, Maryland breed yellow-fever-infected mosquitoes.
1967
The International Red Cross says mustard gas and possibly nerve agents were used by the Egyptians against civilians in the Yemen civil war.
1969
23 U.S. servicemen and one U.S. civilian are exposed to sarin in Okinawa, Japan, while cleaning bombs filled with the deadly nerve agent.
1972
The U.S. and Russia sign a treaty banning the use of biological weapons, and the U.S. claims by the following year to have destroyed its weapons.
1979
A Soviet bioweapons facility releases a plume of anthrax, killing at least 64 people. Thousands could have died if the wind was blowing the other way. Despite the treaty banning biological weapons, the Soviet program had been going full speed.
1980
Iraq attacks Iran and soon unleashes a mustard agent and the nerve agent tabun, delivered in bombs dropped by airplanes.
1984
Followers of a cult member running for a county judgeship in a local election sprinkle homegrown salmonella bacteria on supermarket produce, door handles and restaurant salad bars in Oregon. Nobody dies, but 751 people become ill.
1994
Residents of Matsumoto, Japan, develop symptoms of illness due to nerve gas. Seven die and 500 are sickened. A second attack in 1995 strikes a Tokyo subway, killing 12 and infecting thousands.
2001
A newspaper editor in Florida dies of anthrax traced to a letter. Anthrax-laden letters also turn up at the offices of ABC, CBS, and NBC in New York. Anthrax is also found in the New York office of Gov. George Pataki. Letters containing anthrax also arrive at the U.S. Senate mailroom. 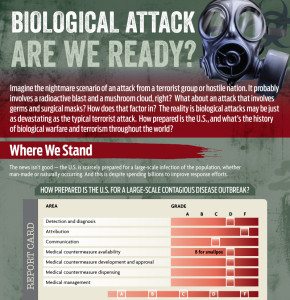