How a panicked response to 9/11 wastes billions of dollars fighting a minuscule threat.

The DHS was created to fix a problem: 9/11
Or rather, the problems that led to 9/11: communication, coordination.[2]

But lost track of two members who made it to Bangkok.

These two terrorists made it to L.A.

And eventually flew American Airlines 77 into the Pentagon.

2.) FBI agent identified hijacked airliners as the weapon al-Qaeada would use.

Agent in Phoenix noted “Usama bin Laden” would attempt to send his men through aviation schools in the U.S.

3.) The Minneapolis FBI field office believed Zacharias Moussaoui, the accused 20th hijacker was planning the hijacking of a plane.

Yet failed to monitor him.

So the DHS was formed. So this wouldn’t happen again.
DHS=
22 agencies
70 buildings in 40 locations in DC
Reporting to 108 Congressional subcommittees and oversight panels.

A cost benefit analysis found that for DHS spending to be worthwhile…
DHS would have to stop 4 otherwise successful car bomb attempts per day.[6]

Only 17 private American citizens died last year to terrorist attacks.
You have a greater chance of being crushed to death by your own furniture.[3]

Is our second largest government agency worth it?

Budgeting without regard for population density, critical infrastructure, or risk assessments creates even more waste.[2]

“If power companies invested in infrastructure the way DHS and Congress fight terrorism, a New Yorker wouldn’t be able to run a hair dryer, but everyone in Bozeman, Mont., could light up a stadium” ~ Economist Veronique de Rugy[8] 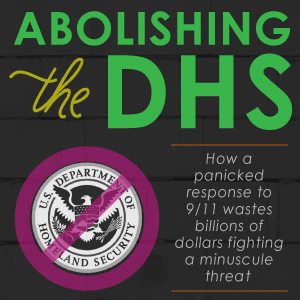